Foresight is an instrument aimed at designing the future through identifying global challenges and setting priorities for socio-economic and science and technology (S&T) policy. It is based on large-scale expertise and building consensus among key stakeholders on desired visions of the future.

What will the picture of the future be for Russia and for the world? Are global leaders and our country prepared to respond to the major challenges of modern society? What tools do "think tanks" and the leading Russian centres use to study the future of the world? To discuss these and other issues most distinguished Foresight experts from 14 countries gathered at a workshop at HSE.

"There is no other event in Russia with an equally complex agenda and such an impressive list of invited experts. Here international organisations that define standards for Future Studies — UNIDO, UNESCO, OECD — are represented, as well as research centres of the countries that take leading positions in Foresight, from South Korea to Brazil" — first Vice-Rector, HSE ISSEK Director Leonid Gokhberg said in his welcome address to the participants.

A very strong delegation arrived from Asia. Deputy Director of the National Institute of Science and Technology Policy Kuniko Urashima briefed the results of the Japanese Foresight, which is in its ninth round since the 1970s. Moonjung Choi, expert from the Korea Institute of S&T Evaluation and Planning, systemised South Korea's experience. Foresight projects of three BRICS countries — Brazil, China and South Africa — were described by Cristiano Cagnin, Senior Advisor at the Centre for Strategic Studies and Management in Science, Technology and Innovation; Mu Rongping, Director of the Institute of Policy and Management at Chinese Academy of Sciences; and Anastassios Pouris, Director of the Institute for Technological Innovation, University of Pretoria. Ricardo Seidl da Fonseca, a Consultant on Foresight and S&T Policy, gave a comparative picture of Foresight in Romania, Vietnam, Kazakhstan.

Tatiana Chernyavskaya from UNIDO made a presentation on the Eurasian virtual centre on technology Foresight. Riel Miller, Head of Foresight in UNESCO, focused on the implementation of Foresight to form a new agenda in education and identify promising competence profiles for the economy of the future. Jennifer Cassingena Harper from the Council for Science and Technology of Malta presented European Commission’s ambitious plans to strengthen the competitive advantages of the macro-region with the help of the new EU framework programme Horizon 2020, which provides basis for broad collaboration of scientists from 26 countries. Manfred Spiesberger from the Centre for Social Innovation (Austria) spoke on priorities of S&T cooperation with the EU, based on Foresight results of the ERA.Net RUS project.

Leonid Gokhberg’s presentation sparked the audience’s great interest in the results of the Russian S&T Foresight 2030. In fact, Angela Wilkinson, Adviser on OECD Strategic Foresight, urged the guests to be "constructive skeptics" in the discussion, but despite that the report gathered a lot of positive feedbacks. Some participants, in particular Luke Georghiou, Vice President of Research and Innovation at the University of Manchester, who heads the International Advisory Board of the HSE ISSEK’s Foresight Centre, and Riel Miller from UNESCO twitted their impressions during the workshop.

Deputy Minister of Education and Science of Russia Lyudmila Ogorodova underlined in her speech at the opening plenary session, "This is a very important time for Russia: we are searching for new sources of economic growth. We need to modernise the traditional sectors of the economy and build new ones, "pushing" the country forward". The ministry spokeswoman remarked on her participation in the project to develop Russian S&T Foresight towards 2030, and in the evaluation of its results. She said that the study was considered as a practical tool for decision makers; in particular, it is widely used to update government programmes and development policies for major companies. Professor Ogorodova also highly evaluated the major role of Foresight methodology in developing long-term strategies, because "this process not only produces results, but also integrates the team". Among the Foresight results which were then presented in detail in a number of presentations, the Deputy Minister highlighted the creation of a national system of technology Foresight in Russia and the launch of Interdepartmental Commission on Technology Foresight, which was established to coordinate the efforts of all the centres, that implement forward-looking projects at the national level, and to regularly discuss their results. In the course of this work several teams were formed — sectoral S&T Foresight centres at the sites of six leading universities, and it is now important not to lose those groups, but to upgrade the level of their cooperation and engagement in the national system of technology Foresight, Lyudmila Ogorodova said. 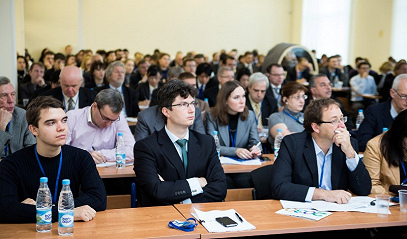 Evolution of the major national Foresight project and its enhancement in the new phase with a wider horizon, basing on the large-scale infrastructure already developed, was discussed in further detail by the HSE Foresight Centre staff — its Director Alexander Sokolov, Oleg Karasev, Alexander Chulok, Konstantin Vishnevskiy, as well as the heads and key experts of HSE international laboratories — Jean Guinet, Ian Miles, Ozcan Saritas, Dirk Meissner and Thomas Thurner. They all paid attention to the integration of the results of Foresight studies into national S&T policy, building strategies for industrial sectors and large companies.

Implementation of Foresight results was constantly among the foci of the two-day practice-oriented discussion. The participants also addressed multiple dimensions of both the external outline of managing Foresight projects and its internal aspects — the design and tools for the exercise.

Another topic covered by the participants was assessment of planned targets, priorities and threats. In particular, they dwelled on indicators for measuring the impact of Foresight and optimisation of quantitative and qualitative research methods of the future. Besides that, ICT-based tools for Big Data analytics were described by Oleg Ena from HSE. Jonathan Calof from the University of Ottawa, Canada, spoke on the method of "strategic intelligence". These topics overlapped with another important cluster of issues — networking, productive communication of various expert circles, and the involvement of the general public.

Within the issue of building an effective dialogue about the future with key stakeholders, experts reviewed the build up of the Foresight discourse — some interesting points were given in the presentation by Fabienne Goux-Baudiment, heading the French Research Centre for Futures Studies "proGective". Also, problems were discussed which concerned the development of a single platform and a common language to talk about priorities of the societal development.

Jean Guinet from HSE, former head of the Department of country analysis of the OECD Directorate for Science, Technology and Industry, raised the question of the importance of a "mandate for change", without which it is difficult to conduct Foresight for decision-makers.

Attila Havas from the Institute of Economics of the Hungarian Academy of Sciences said: "Foresight takes a long way to those who make decisions". The reason for this is that "the construction of the future needs the efforts of various ministries harmonised, but sometimes they even do not speak to each other", Tatiana Chernyavskaya from UNIDO added. Riel Miller drew the participants’ attention to the fact that the main context for the development of innovations is defined by "local knowledge", while it is macroconditions which one typically considers in Foresight studies.

Thierry Gaudin, President of the French association "Prospective 2100", pointed out the need to "translate Foresight experts’ advice into the language of a particular country". On the other hand, it is extremely important to centralise and synchronise efforts of strategists of various levels — international, national, and corporate. Rafael Popper from the University of Manchester commented on the problem of "fragmentation of efforts" in an unconstructive “Champion race” in anticipating trends and priorities. He offered a possible solution in the paradigm of Foresight 3.0, which presupposes the widest possible involvement of all stakeholders into the work on scenarios of the future. John Sweeney from the Centre for Futures Studies, the University of Hawaii at Manoa (USA) spoke on the collaborative formation of skills needed in Foresight.

Some reports on the future paradoxically highlighted historical issues (Ozcan Saritas showed the evolution of the concept of "War and Peace"), as well as enduring cultural differences between the East and the West. Here a vivid example was given by Jose Cordeiro from the Singularity University (USA), who mentioned a bad attitude to robots in Europe, as opposed to a very good one — in Asia. With dragons, he said, it was the same thing: dragons are considered evil in European folklore, whereas in Asia they have the exactly opposite attitude. The participants covered in their presentations such a broad range of topics that sometimes one could get a feeling that they were witnessing several fora at once — on the issues of economics, politics, culture, urbanism and history. 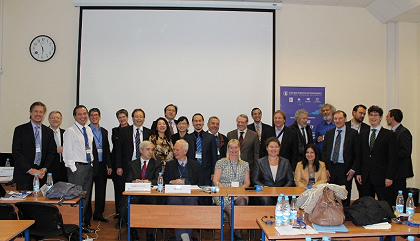 Most speakers continued cooperative work the next day at the meeting of the International Advisory Board of the HSE ISSEK’s Foresight Centre. As it was stressed by the patriarch of the French Foresight Thierry Gaudin, in Russia the core of serious research in the field of the future is now formed, and the world community is taking over the Russian experience.

How will the participants support the workshop’s call, and, in fact, its motto "Exploring new frontiers in Foresight"? This can be traced, in particular, in academic publications. Among HSE guests were chief editors of specialised international journals such as Technovation (Jonathan Linton), Foresight (Ozcan Saritas), International Journal of Foresight and Innovation Policy (Attila Havas, Regional Editor for Eastern Europe and Russia).

The organisers plan to cover all the topics of the worshop in a series of online publications, as well as in a multi-author monograph, which is expected to be released by the international publishing house Springer.