Who Studies Russian Science and How?

On February 8, Russian Science Day, the Higher School of Economics, along with the Russian Federal State Statistics Service (Rosstat) and the Ministry of Education and Science, released its annual statistical data book on the state of science, technology, and innovation. Below, the Director of the HSE ISSEK and HSE First Vice Rector Leonid Gokhberg discusses how research on science in Russia is advancing.

The Origin of Russia’s System of Science Statistics

Our team, many members of which still work together, compiled the first statistical data book in 1991. It was released under the imprint of the State Statistics Committee.

Statistics on science existed in the Soviet Union, but they were very specific and did no 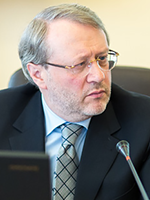 t adhere to international standards. In addition, the statistics that did exist were limited to several key indicators and were oftentimes of a non-statistical nature. The data books that we now release are based on a system of statistical observation that supposes that data is aggregated from the bottom up – that is, from respondents in the field to the federal level. This is normal practice for economic statistics. But in Soviet times, a number of statistical indicators were compiled by hand by a certain group of officials at the State Planning Committee (Gosplan), the State Committee on Science and Technology, and the State Statistics Committee. They would agree on a number amongst themselves; however, this number would hide, for example, a portion of defence spending. What exactly went into this number no one knew, but we were able to show that because of this, data on science funding was highly inflated. In the early 1990s we radically transformed statistics and came up with a normal system of observations and calculations. And we have been supporting and developing this system ever since – naturally, in cooperation with Rosstat and the Ministry of Education and Science.

The system is set up as follows: Rosstat collects the data, and we develop the methodology, the entire conceptual apparatus, the classifications, and the statistical forms and instructions, all while consulting with various experts if necessary. The resulting statistical data books have three names on them – HSE, Rosstat, and the Ministry of Education and Science – making the books completely official.

It’s clear that state statistics cannot cover absolutely everything; constantly arising are new areas of science and innovation, as well as new technologies about which little information exists starting out. But what help us here are the monitoring studies that HSE itself carries out. These compensate for the gaps in official statistics, and they can provide a certain ‘intervention’ into completely new areas of study. In many cases, these fields are lacking well-established international standards.

But we are entering different areas as well – big data processing, semantic analysis, and network analysis. In fact, within the HSE Institute for Statistical Studies and Economics of Knowledge, we have created a comprehensive intellectual data analysis system, which allows us to identify and evaluate prospective tech trends, growing markets, new products, and startups, and we also assess the network communications between organisations, including through people, even if these people are not formally affiliated with these organisations. This information opens up a lot of doors for the future, but we are not yet able to include it in our annual data books. Continuity is important in statistics, and the data has to be comparable.

Overall, statistics on science is one of the most developed fields in economic statistics in Russia. For many years we have been participating in international working groups that set the standards for this field, including the Organisation for Economic Co-operation and Development (OECD), Eurostat, and the International Telecommunication Union (ITU). We have access to some of the newest methodologies, the best country practices, and perhaps most important, we are active participants in the formation of these international statistical standards.

Two key statistical standards in the field of science, technology, and innovation are the OECD Frascati Manual (in the most recent edition, we wrote an entire chapter, ‘Measurement of R&D Personnel: Persons Employed and External Contributors’) and the Oslo Manual: Guidelines for Collecting and Interpreting Innovation Data. Work is currently underway on a new version of the manual, and along with Eurostat and our colleagues in the Netherlands and Spain, we are entering into a consortium that is doing just that. We’ve already completed several new sections that are based on our own research.

I can say that we have taken absolutely pioneering approaches in a number of statistical areas in these sectors. In particular, our earlier developments in information and communications technology have been used in recent years to create several new areas relating to statistics on developing technologies, including nanotechnology, biotechnology, and advanced manufacturing technology. And we are currently working on photonics statistics as well.

Another area of statistics that we’ve been able to work on is the statistics of engineering and industrial design as new types of economic activity. We worked out an entire system of classifications, indicators, and statistical forms, and we’ve conducted a series of pilot studies as well. A brief summary of the studies’ results have been published on the website of the Ministry of Industry and Trade, which commissioned the work.

Who Uses Statistics on Science and Innovation and How?

Statistical indicators on science are very popular, and they are easy to find in official, high-level documentation, such as the government’s strategic documents and in the president’s address to the Federal Assembly as well. These figures are in standardised templates for preparing specialised state programmes and the programmes outlining the innovative development of state-owned companies. They aim to drive government agencies, companies, universities, and research centres to increase the efficiency of their activities in the field of science and innovation. Data on science and innovation is used regularly in research and express analytics.

Moreover, and this is a documented fact, it was our group that began using the word ‘innovation’ for the first time in Russia more than 20 years ago. The first publications using this word were ours (see ‘Statistics of Innovation: First Results and Upcoming Prospects.’ Questions in Statistics. 1996. No. 3, L. M. Gokhberg, I. A. Kuznetsov, or ‘Statistics of Science and Innovation.’ Statistical Dictionary. 1996. L. M. Gokhberg).

"But we are entering different areas as well – big data processing, semantic analysis, and network analysis"

There is a certain lag in the timeframe for publishing the data books and the period that the data in the books covers. This difference is a year. The data book that was just released contains statistics from 2015, a lag that is inevitable. The thing is, companies release their statistical data after they finish their balance sheet, and that happens in March. They complete their stats forms in April and give them to the local statistics authorities, where they are processed and aggregated. Then they go off to Rosstat, where any mistakes are corrected, and only close to September does the summary of the results come out in Russia. Time is needed to analyse the data and prepare it for publication in the data book itself.

But I want to note that in Russia, we collect these statistics and publish them every year, while in many other countries this happens once every few years. Abroad, the lag between when the data is collected and when it is published might reach three or four years.

Which Myths Do Statistics Destroy?

One example is the question of whether or not Russian companies are innovative. There are two common camps here. The first says that there is no innovation in Russia overall, while the second says that it is Russian manufacturing that is not innovative. After analysing this question, one must admit that not all participants of this discussion are using the correct terminology. Innovation concerns more than just global breakthroughs. Economic and industrial growth is largely connected to on-going improvements in technology and products, not with radical ones.

Following the economic theory of innovation, statistics allow for innovations to be separated by level of novelty; that is, are they new for the global or Russian market, for a particular industry, for a specific company, and so forth. This allows us to look at the innovation comprehensively, and not linearly or in black and white. The same thing is true for the idea that Russian companies are not innovative. Can they all really be considered ‘un-innovative’ if they invest roughly 800 billion rubles of their own money each year in innovation?

Many experts who deal with such a complex sphere unfortunately use oversimplified categories and ideas. Simplified, linear solutions do not ultimately lead to success, however.

The statistical data books that we release to the general public are not only the top layer of data that naturally paints a fairly certain picture of what is happening in the Russian science and technological spheres, but we also have a lot more statistics at our disposal. In a certain sense, the data books make up the statistical mainstream, which does not contain the results of pilot studies or any specialised sample surveys. But we nonetheless try to include such results in cases where traditional economic statistics methods are not applicable.

For example, the data book contains a section on the public’s attitude towards science and innovation. This is clearly a way of conducting sociological surveys, which do take place as part of HSE’s Monitoring Survey of Innovative Behavior of the Population, and it is apparent that peoples’ attitude towards innovation is gradually changing. After all, there is a growing percentage of people who, if not born in the internet era, are nonetheless unable to imagine their lives without information technologies and mobile communications.

In addition, the idea that the Russian population is not innovative is also a myth to a certain degree. Our data show that Russia is ahead of many developed nations in terms of the public’s involvement in user innovation. There is a good reason for this – people are trying to improve their quality of life themselves and create a greater good to which they don’t currently have access.

Some of the authors of the very first data book released in 1991 currently work in the HSE Institute for Statistical Studies and Economics of Knowledge, including Alexander Sokolov, Irina Kuznetsova, Elena Nechaeva, Larisa Rosovetskaya, and Galina Sagieva. This is a very rare example of how throughout the turbulent uncertainty of the past 25 years, we have nonetheless been able to maintain this area of research and the core team – not only maintain, though, but also expand the team here at the Higher School of Economics. The Institute now has several generations of researchers in this field.

Our master’s programme in Governance of Science, Technology and Innovation has a special course on statistics and indicators in science and innovation. A number of students (50-60 last year) complete paid internships at the Institute for Statistical Studies and Economics of Knowledge during their time at the university. In addition, our graduates are sought after in not only Russia, a recent example being one of our graduates who completed her bachelor’s (Fuad Aleskerov her advisor) before studying the statistics of new technology in our programme. She is now in a PhD programme at the University of Manchester, a long-time partner of ours.