Leonid Gokhberg: “Innovation development in the regions is a single option factor of the country’s economic growth”

Video of the presentation 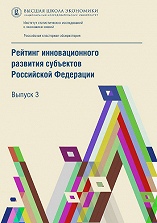 Moscow, Tatarstan, the Kaluga Region and St. Petersburg have the highest innovation rating: these four regions make the first RRII group. The second group comprises 24 regions, the third one – 40 regions. The fourth group (15 Russian regions) is at the bottom of the rating.

The following regions have radically improved their positions in the integral rating during the previous year: the Tambov Region (+25 positions), the Archangelsk Region (+17), the Republic of Altai (+15), the Kurgan Region (+14), and the Khanty-Mansiysk Autonomous Region (+13).

Some regions’ innovation development has significantly slowed down: these include the Kamchatka Region (–19 positions), the Ivanovo Region (–16), the Omsk Region (–13), the Vladimir Region (–10), and the Saratov Region (–10).

The Archangelsk Region demonstrated a sustainable growth pattern (+19 and +17 positions during the previous two years), while the Omsk Region’s rating had plunged for two years in a row (–28 and –13).

Differentiation of the Russian regions’ RRII values became less pronounced, measured as the ratio of the highest and lowest RRII values: for the previous rating it was 3,7 times, while for the current one it’s less than 3,5. The two opposite groups (the first and the fourth) became much smaller, in favour of the two middle ones (the second and the third). Thus the number of regions in the first group has dropped from 12 to 4, in the fourth one – from 21 to 15.

The gap between the four leading and all other regions became much bigger, including the regions – members of the first group in the previous rating (the Chuvash Republic, the Perm, Sverdlovsk, Nizhny Novgorod, Tomsk, Ulyanovsk and Moscow Regions).

According to Leonid Gokhberg, HSE first vice-rector, the rating refutes the widespread opinion that innovation is no longer in trend: “Relevance of long-term innovation agenda in the current situation is only growing, and innovation development in the regions is becoming a single option factor of the country’s economic growth. In particular, this is manifested in the orientation towards import substitution and the launch of a whole range of major projects in this field, such as the National Technology Initiative announced in 2014 in the presidential address to the Federal Assembly. I’d also like to remind about the ongoing programmes to support innovation territorial clusters, establishing advanced socio-economic development territories, and other strategic policies”.

Increasing the quality of innovation policy in Russian regions is a current priority for the federal government, noted Artem Shadrin, director of the Department of Social Development and Innovations of the Russian Ministry of Economic Development. Innovations are becoming an important aspect of the regions’ investment attractiveness. Artem Shadrin stressed that the HSE rating may be useful for large companies choosing locations for new production facilities, and for public authorities. The next step in developing the rating should be comparing innovation policies’ efficiency in specific areas, such as promoting demand, developing regional innovation infrastructure, etc.

Evgeny Kutsenko, head of the HSE Russian Cluster Observatory, believes that the fast-growing regions’ success is based on active promotion of companies’ innovation activities, and on better innovation policies. In his opinion, consistent and coordinated innovation development decisions taken by public authorities, companies, universities, and research organisations have a long-term effect.

The current Russian Regional Innovation Development Rating was calculated by the HSE Institute for Statistical Studies and Economics of Knowledge for the third time, based on the latest official statistics, bibliometric and patent data, Russian Federal Treasury reports, and open data available at the government agencies’ web portals.

The integrated rating is based on four sub-indexes which measure the following: 1) socio-economic conditions for innovation activities; 2) their productivity; 3) S&T potential; and 4) quality of regional innovation policies. To analyse these factors in more detail, specific measurements for 13 subject groups and 37 indicators were introduced. E.g. the “S&T potential” sub-index includes three subject groups: R&D funding, R&D personnel, R&D productivity. The latter group is further broken down into four indicators: number of research papers, number of patent applications, number of advanced production technologies, and ratio of technology export revenues to the GRDP.

The rating helps federal-level decision makers to more precisely “localise” innovation support policy tools, allows regions to assess their strengths and weaknesses in this field and analyse the recent dynamics of their positions.

For further information about the rating please contact the HSE Institute for Statistical Studies and Economics of Knowledge (issek@hse.ru) or the HSE Russian Cluster Observatory (ruscluster@hse.ru).

All references to the rating must indicate the source: National Research University Higher School of Economics (HSE), Institute for Statistical Studies and Economics of Knowledge (ISSEK)

Click here for media coverage of the new rating (in Russian).