Lectures on Innovation Management by Prof. Jonathan Calof from the University of Ottawa

On December 8-9, 2014, the students and academic staff of ISSEK attended  the HSE-hosted lectures by a guest speaker Jonathan Calof, Professor at the University of Ottawa (Canada).

The purpose of the lectures was to address the question of how organisations innovate using as the basis for discussion the study of the most successful and biggest Canadian companies, yet also the biggest failures in Canadian history of innovation – the Nortel case. The analysis of the success and bankruptcy of Nortel was carried out by Dr. Calof and his research team with an intention that lessons learned about Nortel’s corporate failurewould be of use for leaders in  other organisations to identify critical failure factors, and thus, take steps to avoid following the path of Nortel.

At the beginning of the lecture “Learning from Nortel Management of Innovation and Creating Technology Success” J. Calof  introduced to  the audience his research team, the  methodology of the Nortel case study, data gathering and analysis, explained the specificities, advantages/disadvantages and difficulties of conducting interview study.

The speaker went on covering from managerial side and managing of innovations such topics as culture of innovations, external and internal factors that influence innovation process, presented the GE matrix and R-W-W- Screen principles of project selection.

According to the speaker there are several key factors in innovation management: a system thatstipulates ideas and takes on implementing them, technology and customer knowledge, understanding of external environment, just to name a few. Pre-97 Nortel was good in all these indicators: the company was creating future, it was very  good in providing the environment for  generating and carrying out ideas through R&D;  Nortel was hiring the best graduates of the time, its employees attended various conferences, as well as the company itself regularly organised the so called ‘Princeton series’ –  seminars which brought top management thinkers of the time to tell Nortel’s employees about the latest management theories, to hear about what was going on, to listen and to learn!

Besides internal innovative culture key to Nortel’s success were its relationships with customers, reaching even to friendship status, Nortel’s knowledge of its customers and the trust which the company enjoyed from the clients. The problem is that the latter was abused by Nortel and over time led to arrogance from Nortel side. The same is also the case with Nortel’s internal management, its employees’ loyalty framed as ‘bleeding blue’ culture was also violated over time, partly due to Nortel’s acquisitions of new companies which it was not able to integrate. Hence, J. Calof warned that sometimes it would be better to run new entities separately.

In terms of company-customer relationships the guest lecturer spoke also about the so called innovation dilemma:  is it the customer who leads accompany or that’s the company who leads the customer? According to the speaker the innovation process should becustomer focused, but not customer driven: one should differentiate between what customers want or ask for and what they really need. 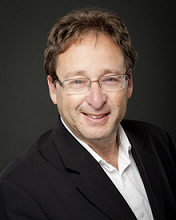 Dr. Calof is an Associate Professor of International Business and Strategy at the Telfer School of Management at University of Ottawa; recognized specialist in competitive intelligence,  technical foresight,  business and management insight. His professional occupations range from being a Board member for CASIS (Canadian Association of Security and Intelligence Studies) and a member of the Advisory Board for the Algonquin College intelligence analyst program to the co-director of the Foresight Synergy Network.

Jonathan has given over 1,000 speeches, seminars and keynote addresses around the world on intelligence and insight and has helped several companies and government agencies around the world enhance their intelligence capabilities. In recognition of his contribution to the competitive intelligence field, Jonathan was presented with Frost and Sullivan’s life time achievement award and was made a Fellow of the Society of Competitive Intelligence Professionals. He was also named Honorary Professor at Yunnan Normal University in China. Interest in his work has also resulted in several interviews on radio and in print around the world and has been featured in national publications such as  Forbes ,  Business Week ,  CIO Magazine ,  Financial Times ,  The National Post ,  Globe and Mail ,  Canadian Business , and others.

He is a prolific author with over 150 publications to his credit. As well, Jonathan is the author and co-editor of several books on competitive intelligence including co-editor of the Competitive Intelligence Foundation’s  Conference and Trade Show Intelligence  book. He also pens a column on event intelligence for competitive intelligence magazine. In addition to his involvement in the consulting and academic world, Dr. Calof is also a director with Success Nexus, a Malaysian biodiesel Company, RoboCoder, a Canadian software company, an Associate with the Estey Centre, and on the advisory board of Mempore, a Canadian cleantech company.